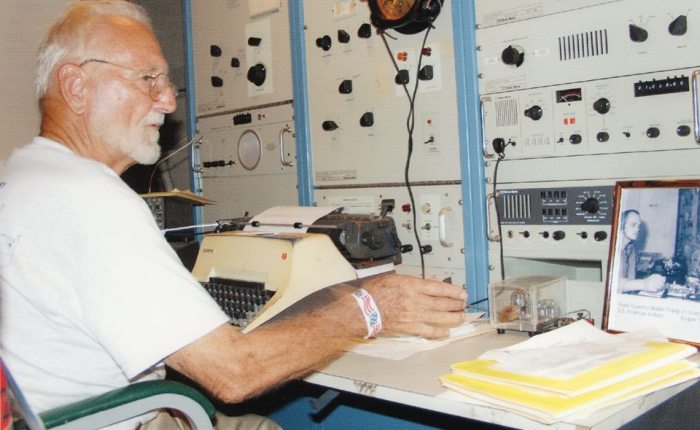 Question:  Who?
Answer:  A group of men and women who share three interests:
Question:  Okay, but what do you DO?
Answer:  Many of us participate in all three of the above activities.

This past Saturday was typical. Dean Sever, one of our licensed Commercial and Amateur licensed Radiotelegraphers was on board for the weekly system tests. First, he went to the Amateur Radio room (W4AVM) and contacted K6KPH in California and sent one message, then answered another ham in Arizona. These contacts were made direct, no satellites nor repeaters, using Morse code on high frequency.  Then he went to the ship’s commercial Radio Room (KKUI), made our scheduled call to San Francisco Radio (KSM), sent two messages, and received one from KSM.

Dean tested the ship’s Main and Reserve transmitters and both full-coverage receivers for sensitivity checks. All of these contacts were transmitted and received using Morse code, as was done during the vessels active years. In the meantime, Dean visited with guests who were fascinated by the “magic” of Radiotelegraphy as it had been for many years.

Our group is also active with other shipboard activities and maintenance. Five of us assisted with the fundraising activity associated with Gasparilla Day in Tampa. Some also help with Safety Watches as required by the U. S. Coast Guard, docenting, simple maintenance and janitorial duties, and recently getting the materials together for the vessel’s new signboards.

We have more than an interest in the vessel – we are proud of her and glad to have the opportunity to help keep Morse Code alive on the airways. During our harbor cruises we offer, free of charge, messages that anyone onboard can send to any address in the U.S.A. These freebie messages are transmitted by Morse Code from W4AVM to Amateur stations ashore using Morse Code, then phoned to the addressee from the shoreside Amateur operator or, if they have an e-mail address, sent direct to KSM San Francisco Radio on commercial frequencies for relay via the internet.

That’s what we do, and enjoy doing it.
C’mon aboard and visit us in the radio room! 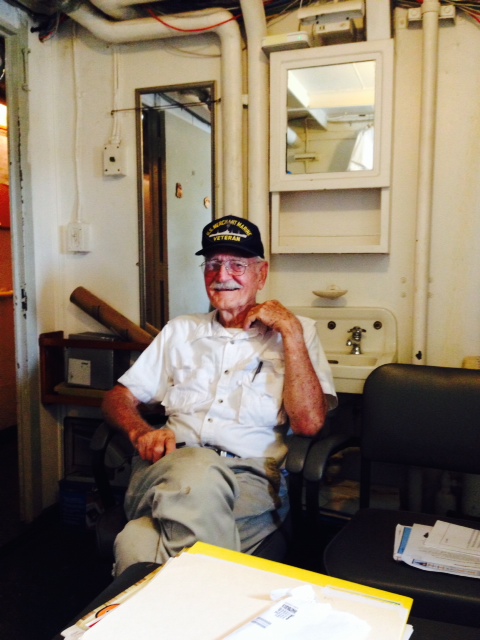 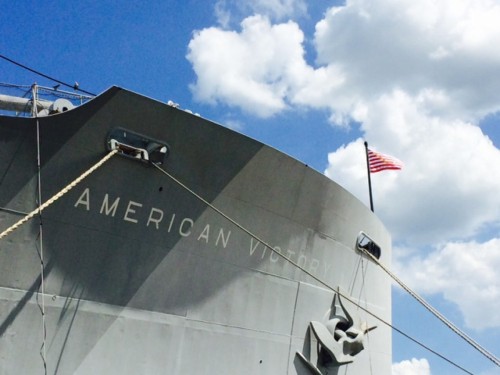 Today I boarded the SS AMERICAN VICTORY at 0940 hours.  A new volunteer joined us to fill the Station Bill.  I familiarized him with the requirements of the Patrol Investigator position on the Station Bill.  After giving him a quick tour around the ship, he took a radio and got to work sweeping and washing the decks of all the dirt and mess that builds up throughout the week.

Between 1030 and 1200 hours I spoke with a visitor from China who boarded to tour the ship.  She enjoyed hearing that the AMVIC was the first American vessel to enter Shanghai a few days after the Japanese surrender.  Other passengers from Chicago and the Philippines joined us!

Several passengers from Russia and Belarus toured the ship between 1500 and 1600 hours. Their faces brightened when I greeted them in the tiny bit of Russian that I can speak.  At 1500 hours I encouraged those on the ship to gather on the fantail to watch the departure proceedings of the CARNIVAL PARADISE.  They really enjoyed anticipating the loud, booming signals used:

10 second foghorn blast telling passengers to report to muster station… 7 short blasts followed by 1 long blast signaling the Abandon Ship Signal… a single blast indicates end of drill…That same signal is given as soon as the last line is taken in and the ship gets underway. If the ship is underway, backing down the signal is 3 blasts on the ship’s horn

They watched as the lines were taken in and the thrusters pushed the ship into the channel.  They waved and shouted to the passengers of the cruise ship as she passed us on her way down the channel!

Several of them told me that the time they spent aboard the AmVic was extremely informative and fun!  By 1630 it was raining pretty hard, so the ship was empty of passengers by 1640.

One of the last passengers to leave today was the Chief Engineer on the S.S. BADGER (a Lake Michigan car ferry).  The S.S. BADGER, launched in 1953, is the largest car ferry to ever sail Lake Michigan. Just like the AmVic, she still operates today and affords the opportunity to take a step back into the past and take a journey that’s as important as the destination…www.ssbadger.com 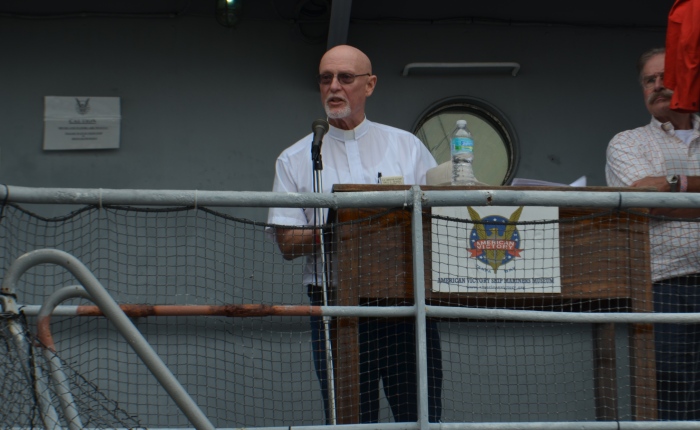 On Saturdays, the American Victory Ship is open from 10am until 5pm. As a volunteer since the ship first came to Tampa in 1999, I enjoy coming on Saturdays to serve on the station bill for the day. Being an operational vessel, the ship must have 3 qualified watchstanders on board in order to open to the public. I have served many roles at the ship and I love interacting with visitors and teaching them the history of our wonderful ship!

Upon opening, I like to establish rapport with people walking dockside. I told them the good news that they would be able to board the ship free of charge…then, I informed them that they would have to pay to get off! This inevitably brought a cheerful smile to their lips. Sometimes I offered to pay the entrance fee for the one who could tell me the registered gross tonnage of the ship, or how long it took to build her. (So far, I have never had to pay anyone’s entrance fee, but I will if they answer correctly!) Then I would find out what state or country they had come from and introduce them to Faith at the Gangway, who would get them started on a self-guided tour.

At 1000 hours a family from Wisconsin boarded and accompanied me as I did an initial walk around the ship.  By 1250 hours, visitors from Tennessee, Ohio, Alabama, Honduras, Peru, Switzerland, and New Zealand had also toured the decks of the American Victory Ship!

There was a steady flow of visitors on and off the ship all day.  By 1655, I had been in contact with additional passengers from Albania, Ethiopia, Morocco, Russia, Canada, Mexico, Cuba, and Puerto Rico.  Several had been to the Outback Bowl football game.  Scattered among the many who were aboard today were a few veterans and active duty personnel. One of them was an Army PFC who had been injured in a parachute jump.

Since so many people miss the engine room, whenever I get a chance I would escort them to the engine room. On the way there they were invited to sit down for a few minutes in the Crew’s Mess, where I would explain the nautical origin of many phrases that our found in the English language (i.e. “Under the weather”, “Three Sheets to the wind”, “Pipe Down”, “Son of a gun”, and “Between the devil and the deep, blue sea.”

Today I also stopped by one of the heads, telling visitors that the SS AMERICAN VICTORY is probably one of the only museums that features bathrooms as part of the historic tour. Then I explained that the original “heads” on sailing ships of old were in the bow of the ship near the cat heads and the figure head.  I brought a couple of pictures of a model of a British ship of the line, and pointed out the “heads.”

People were also very interested in seeing the radio room in use as our volunteer operator Don Berger used Morse Code to talk to a station in San Francisco!

Passengers who boarded around 1500 were encouraged to join me at the stern to observe the departure of the two cruise ships from the Port: BRILLIANCE OF THE SEAS and the VISION OF THE SEAS.  This is something all visitors look forward to and enjoy seeing. Many photos were taken as the lines were taken in and the cruise ships got underway.